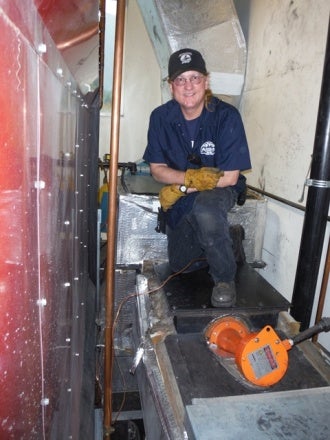 An Alaskan brewery has installed a Martin Engineering sonic horn to improve ash flow and prevent clogging in the exhaust stream of its hybrid boiler system.

The system uses spent grain from the brewing process as fuel and ash accumulation was forcing the company to shut down its equipment, allow it cool, then manually clean the swirlers and collectors of its ash handler on a weekly basis. The process required three to four days downtime with up to twelve hours of maintenance work.

The Alaskan Brewing Company’s system is thought to be the only one in the US to use spent grain as the sole source of boiler fuel.

Maintenance supervisor Suki Patterson said: "We can use by-products from the brewing process, but that presents some unique issues."

"Conventional hog fuel boilers typically burn feedstocks that produce about 0.5% ash, while the spent grain that we use produces more than 5%."

Brewing process equipment
The brewery’s equipment includes a Model N65 Firebox boiler assembly that operates at 125 PSI during the brewing process, achieving 6,600lbs of steam an hour from a furnace volume of 519ft.

To manage the ash, a Multiclone® dust collector imparts a whirling motion to the ash-laden exhaust gas as it enters the multiple-tube cyclonic collector. The centrifugal force created directs dust particles to collecting tubes, where they fall and are discharged. Clean gas exits the outlet at the collecting tube’s vertical centreline. The boiler also uses timed soot blowers to clear the fire tubes.

"Unlike other fuels typically used in the brewing process, dried grain also produces an extremely fine ash that readily absorbs moisture from the atmosphere," Patterson added. "It tends to develop a gummy texture, so it can collect on the interior surfaces and become difficult to remove."

Patterson researched how other brewers and other industries managed fine ash, aerosols and smoke particles, and contacted Martin Engineering to discuss potential solutions. Martin Engineering developed detailed engineering drawings of the system to help explain the situation and outline the operating conditions.

Product specialist Mike Masterson said: "The conditions resembled the issues we see every day in coal-fired power plants, biomass-fuelled boilers and other applications."

"Once we reviewed all the details, it appeared to be an environment in which a Martin® Sonic Horn could provide some significant benefit."

Martin Engineering offered to ship a Sonic Horn to the brewery on a trial basis, with the understanding that the product could be returned without charge if it was unsuccessful. The company also worked with Patterson and her crew to determine the optimum location and provide instruction on its installation.

Acoustic cleaning technology
Martin Engineering Regional Manager Rich Shields said: "Acoustic cleaning is a proven technology that can raise throughput and reduce blockages in a very wide range of materials, preventing dry particulate build-up to increase system efficiency and service life, while reducing downtime and maintenance."
The Martin® Sonic Horn is an acoustic cleaner that has been widely used in the process industries, particularly in cement manufacturing. In addition to its low-cost of ownership, acoustic cleaning helps avoid structural fatigue or damage.

The horn produces a low-frequency, high-pressure sound wave, from compressed air that flexes a titanium diaphragm in the sound generator. This sound wave is magnified as it is emitted through the cleaner’s bell. The pressure causes dry particulate deposits to resonate and become fluidised, allowing them to be removed by constant gas flow or gravity.

Patterson saw immediate improvements after installation. Company officials have since reported that the system can now complete an entire brewing cycle with little or no performance loss in 94 hours of boiler run time. Martin Engineering’s acoustic cleaner was a key element of the ash handling process which met the firm’s goals for both efficiency and environmental stewardship.

Patterson said: "Even though brewing is not an important market for Martin Engineering, they spent a lot of time helping resolve an issue that had been a nagging problem for us. It was a very small sale, just one component, but it meant a great deal to us. They have been great to work with."