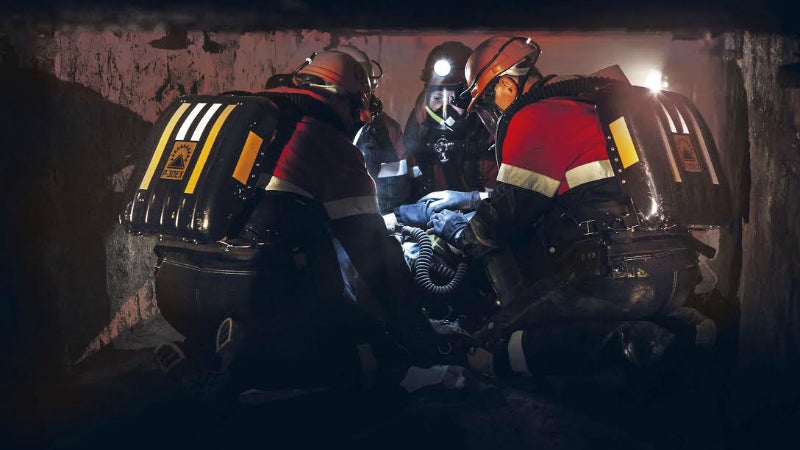 DEZEGA is a designer and manufacturer of mine rescue and escape equipment. The company has representative offices in five international regions and its products are used in more than 40 countries worldwide.

A self-contained self-rescuer (SCSR) is a personal respiratory protection breathing device used for escape from irrespirable atmospheres that pose an immediate danger to life and health (IDLH).

A self-rescuer can be used in mining as well as in civil construction and service maintenance of underground facilities, tunnels, confined spaces, underground train networks, military facilities and other activities connected with performance in an IDHL atmosphere.

The self-rescuer can be used in situations where there is high-density smoke from fires, a high concentration of toxic gases, or a lack of oxygen in the atmosphere. Compared to filtering breathing equipment, focused on a certain type of gas or organic vapour, a chemical oxygen self-rescuer completely isolates the user from potentially harmful environments, protecting him or her from any toxic gases.

The compressed oxygen self-contained closed-circuit breathing apparatus (SCBA) is a piece if respiratory protection equipment designed for long-term technological and rescue operations. The apparatus is used in case of emergencies and in the event of exposure to an irrespirable atmosphere.

DEZEGA’s breathing apparatus is based on parameters important for underground conditions, such as small dimensions, low carry weight, persistence of rated duration, high mechanical resilience, reliability of parts and components, as well as ease of assembly, disassembly and technical maintenance. All DEZEGA compressed oxygen breathing apparatus is designed to work with DEZEGA soda lime scrubber.

The list of auxiliary equipment produced by the company includes test instruments and service tools for functionality testing, parameter control and adjustment, inspection, and service maintenance. Products include:

DEZEGA is an international manufacturing company, focused on respiratory protective equipment with a closed breathing circuit. We design, manufacture and service breathing apparatus on chemical and compressed oxygen:

It took many years before the company reached its current level of achievement. DEZEGA inherited the half-century traditions and quality of Donetsk Mine Rescue Equipment Plant (DZGA) that had produced more than seven million self-rescuers during its operation years. Several generations of miners trusted DZGA with their lives. Since the beginning of the manufacture of CC SCBAs in the 60’s, more than 110,000 have been produced and sold.

Having more than 60 years of successful experience in the field of respiratory protective equipment, DEZEGA continues to develop traditions and standards for miner safety. Our contemporary R&D Center develops the experience of the Soviet Research & Development Institute of Mine Rescue ‘Respirator’ and engineering departments of the plant.

As one of the first companies in Ukraine certified according to ISO 9001: 2008, DEZEGA has successfully ensured its production meets or exceeds national standards in the EU, South Africa, India, Russia, and Australia.

International designer and producer of respiratory protective equipment (RPE), DEZEGA, along with MineARC Systems - the leader in the design and manufacture of refuge chambers - are pleased to announce their recent global working partnership.

This whitepaper will take you through our current product catalogue, which includes self-contained self-rescuers and closed-circuit SCBAs.

This whitepaper will take you through our current product catalogue, which includes self-contained self-rescuers and closed-circuit SCBAs.

Breathing Apparatus for the Mining, Tunnelling and Mine Rescue

DEZEGA is an international company, having more than 50 years’ experience designing and manufacturing mine rescue equipment. The company has representative offices in five regions worldwide. DEZEGA products are used in more than 40 countries.

International designer and producer of respiratory protective equipment (RPE), DEZEGA, along with MineARC Systems - the leader in the design and manufacture of refuge chambers - are pleased to announce their recent global working partnership.

DEZEGA to Supply Equipment for Railway Construction in Norway

From 5 to 8 November 2019, DEZEGA's team took part in the International Trade Fair on Safety, Security and Health at Work A+A 2019, which is held every two years in Düsseldorf, Germany.

Self-rescuers have a specific place among other respiratory protective equipment. Ideally, a worker will never need one. Ideally, there will be no fire or smoke in a confined space, no gas release, no ventilation malfunction. It is an emergency that may happen once in a lifetime.

DEZEGA, an international manufacturer of respiratory protection and mine rescue equipment, launched the All-European Service and Training Office in Tychy, Poland, in January 2018. This is the 4th DEZEGA office of this kind, with the other three located in South Africa, Australia and the Russian Federation.

We are pleased to share the results of the outgoing year and our plans for the next year.

From 17 to 20 October 2017, DEZEGA representatives took part in the 31st International Trade Fair on Safety, Security and Health at Work А+А 2017, which was held in Düsseldorf, Germany.

DEZEGA has started producing its respiratory protective equipment at the junction of Asia and Europe. DEZEGA's newest plant is located in the Aegean Free Economic Zone.

The personal respiratory protective devices of international company DEZEGA will be used in order to ensure the safety of workers of Brenner Base Tunnel project.

DEZEGA has started supplying self-contained self-rescuers from its Turkish production facility to Ukraine. The DEZEGA SSS-1P KS will now be used by Ukrainian miners at market leading enterprises DTEK ENERGO and JSC MINE ADMINISTRATIN Pokrovskoye.

DEZEGA is pleased to announce that it has begun operations in Peru, in a move that will see South America become the fifth continent to receive the company’s innovative technologies.

Ukrainian-based DEZEGA, a manufacturer of respiratory protection devices (RPD), signed a contract with international tunnelling company Bouygues Construction on the supply of DEZEGA self-contained self-rescuers in order to ensure the safety of workers at the IDRIS project.