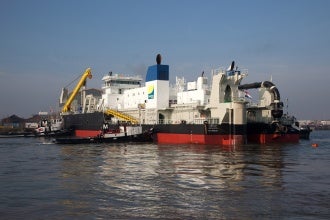 IHC Merwede has successfully named and launched the 23,545kW self-propelled cutter suction dredger AL BAHAR C/D HUTA 12 in a ceremony on 8 March, at the company’s shipyard in Kinderdijk, in the Netherlands.

The contract for the design, construction and delivery of the vessel was signed between Huta Marine Works and IHC Holland, part of IHC Merwede, on 11 October 2012. The keel was laid on 14 August 2013 and the ship will be delivered in the third quarter of this year.

IHC Merwede was awarded the project due to the reliable technology at its disposal and an excellent track record following the notable delivery of a previous order for Huta Marine Works, the stationary cutter suction dredger AL SAKAB.

AL BAHAR C/D HUTA 12 is named after one of the favourite horses of Prophet Muhammad. It means strong, smooth and swift, like the flow of running water. AL BAHAR C/D HUTA 12 has been designed and built using the latest technological developments. She is equipped with separate accommodation for the sailing and operating crews, a travelling deck crane and azimuth thrusters. Special attention has been paid to the maintenance features and accessibility. The vessel will be deployed predominantly on both sides of the Arabian Peninsula, where she will dredge hard soil in difficult climatic conditions.

IHC Merwede’s dredging division managing director, Fer Tummers, said: "Huta Marine Works and IHC Merwede are both proud of the AL BAHAR C/D HUTA 12. We have worked closely with Huta’s staff to achieve a successful outcome. Both companies already have a history of strong cooperation, demonstrated by the delivery of the cutter suction dredger AL SAKAB. Once again, we have proven to be a reliable partner with the construction of this high-quality dredger in record time."