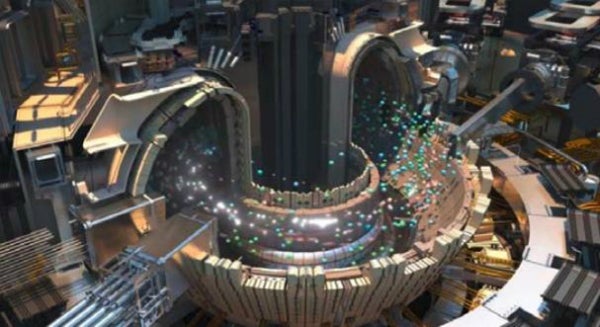 A unique global partnership is currently being created at the Cadarache nuclear research centre in the south of France.

The ITER Tokamak Cryostat is being constructed there, the world’s largest experimental facility for fusion energy. The objective of fusion research is to prove the scientific and technological feasibility of fusion energy and thereby to harness a secure, unlimited and environmentally friendly source of energy.

This is intended to generate a fusion output of 500MW over a period of seven minutes. It uses the same principle as that used by the sun; light atomic nuclei are fused into heavy ones, releasing immense quantities of energy in the process. The International Thermonuclear Experimental Reactor (ITER) is a nuclear fusion reactor based on the Tokamak principle. In this process a deuterium-tritium plasma is kept in a toroidal form at approximately 150 million degrees celsius using a magnetic field.

Above a specific temperature and particle density, a controlled nuclear fusion should then occur in a chain reaction; the energy gain from this should exceed the energy consumption by a factor of ten to enable an economical net gain in energy. It is a long way before this objective can be attained, however, because the assembly and installation of the Tokamak reactor and the Tokamak cargo lift, amongst other things, represent a complex task. For this reason, Fusion for Energy (F4E), the organisation that manages Europe’s contribution to the ITER Project, has engaged a specialist for the construction of the massive cranes required.

The NKMNOELL-REEL consortium, consisting of NKMNoell Special Cranes GmbH, Germany, and REEL SAS, France, has been appointed to design four electric travelling cranes, which will move to and fro between the main buildings of the ITER Project. The ITER components will be assembled in the 60m high assembly hall and then transported into the Tokamak building on the travelling cranes. Large components weighing up to 1,500t will be transported within the tandem hub by the two 750t cranes, each of which will be equipped with two trolleys and a 375t hoist.

This will place maximum demands on each individual worldofrope, published by CASAR 2, crane component. For this reason it has been decided at NKMNOELL-REEL not to make any compromises in the choice of ropes and to purchase CASAR specialist wire ropes via the French dealer Corderie Dor.

These consist of a total of almost 3,500m of galvanised CASAR Paraplast 36mm for the two 750t cranes. CASAR Paraplast is distinguished by its high breaking force, but also its durability and flexibility. The compacted outer strands give the rope a very even surface, and the plastic-covered steel core stabilises the rope structure.

The two auxiliary cranes, each with a lifting capacity of 50t, will be used independently of one another for ancillary lifting processes. Here too galvanised CASAR Paraplast is being used, although only at a diameter of 26mm and a total length of some 400m. All ropes are covered with an open socket on one side and have a welded assembly eye at the other end for easier installation. Incidentally, the abbreviation ITER does not just stand for ‘International Thermonuclear Experimental Reactor’, but is also Latin for the word ‘journey’. This is the journey towards a pioneering and clean source of energy. CASAR is very proud to be involved in this exciting journey.