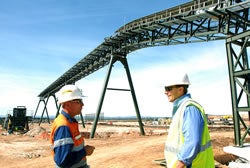 Australia-based Whitehaven Coal has announced that it will go ahead with the construction of $767m open-cut Maules Creek mine despite a lawsuit by an environmental group against clearance to the project.

Northern Inland Council for the Environment filed a lawsuit in Sydney Federal Court under the Federal Environment Protection and Biodiversity Conservation Act in order to halt construction of the Whitehaven’s Maules Creek mine.

The environmental group has urged the court to cancel the government approval issued to the project in February 2013, claiming that the mine would cause environmental damage to the area.

It has also launched a similar action against the expansion of nearby Boggabri coal mine, which is owned by Japanese firm Idemitsu.

The Northland Inland Council for the Environment spokesman Phil Spark was quoted by ABC News as saying that Maules Creek and Boggabri mines will need thousands of hectares of land to be cleared.

"The forest is mature, dominated by big old trees full of hollows and there’s a lot of threatened species that occur," Spark said.

"And all those threatened species and the critically-endangered ecological communities will decline as a result of turning the forest into an open cut coal mine."

"Whitehaven Coal, which operates a portfolio of mines including the Narrabri North mine project in Australia, had announced earlier that construction of the rail spur and loop at the site is expected to start in August."

Whitehaven Coal, which operates a portfolio of mines including the Narrabri North mine project in Australia, had announced earlier that construction of the rail spur and loop at the site is expected to start in August.

Whitehaven’s Maules Creek mine is located at Gunnedah Basin in the north-west region of New South Wales.

Production at the project is expected to begin by the second half of 2014.

According to the company, Maules Creek has an estimated 320 million tonnes of semi-soft coking coal and thermal coal and is considered to be one of the few undeveloped coal assets in the country.

Maules Creek Project has a large reserve of high-quality coal, with a low stripping ratio of 6.4:1 and would require less capital to develop.

This legal suit is the latest step from environmental groups to stop coal mining in certain regions of Australia.

In February, Coast and Country Association of Queensland took a similar step to stop the plans of GVK Group and Gina Rinehart to construct a $10bn coal mine, port and rail project.