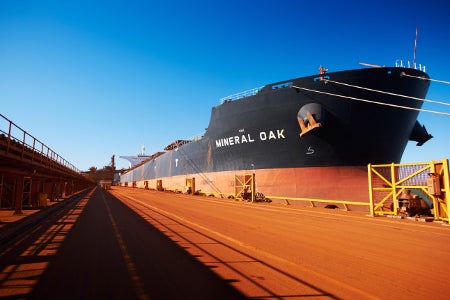 The Port Hedland Port Authority, owned by the Western Australian Government, has reported a 25% rise in iron ore shipments to China in December 2012 when compared to the previous month.

According to data published by Port Hedland, China imported 16.17 million tonnes of iron ore through the port in November 2012, with the volume rising to 20.23 million tonnes in December.

Iron ore shipments in December 2012 also demonstrated a year-on-year rise of 21.6% when compared to figures from December 2011.

The increase reflects a commencement of restocking in the Chinese steel mills after a prolonged destocking period in the second and third quarters of 2012.

The rise in export volumes is also attributed to the upcoming cyclone seasons in Australia and Brazil, which can delay freighter movements until April each year.

Prices had fallen to $80 a tonne over the destocking period, a situation arising from reduced sales as mills used existing stockpiles.

Through this period, several Chinese iron ore mines closed as demand declined, leading to greater demand for foreign imports noce business picked up at the end of 2012.

BHP Billiton and Fortescue Metals Group are the largest users of Port Hedland, with Fortescue announcing expansion plans at its iron ore deposits next to the port.