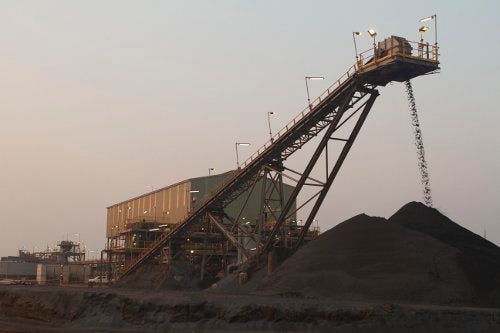 London Mining has improved its performance during the 2013 wet season with a 250% year-on-year increase in iron ore concentrate produced at its Marampa mine in Sierra Leone during the third quarter ended 30 September 2013.

The company said that production, which amounted to 948,000 wet metric tons (wmt), was in line with expectations through the quarter due to initiatives implemented as a result of its experience in the previous year led to a marked improvement in performance over the wet season.

"This demonstrates that our simple and flexible logistics solution can accommodate increased concentrate volumes," Hossie added.

"The plant upgrades are progressing well and we expect to meet our targeted 5.4Mwmt/a (5Mdmt/a) production run-rate and operating cost target of around $47/wmt ($50/dmt) as we exit 2013."

A life-of-mine (LoM) study, which completed during the quarter, demonstrated that production at Marampa may be increased further by improving the efficiency of the existing plant to a rate of 6.5 million wmt a year in 2014 at an expected additional cost of $40m.

The company said it also expects an investment of $240m to upgrade the plant in order to process all ore types and extend the life of mine to more than 40 years based on probable reserves of over 500Mt.