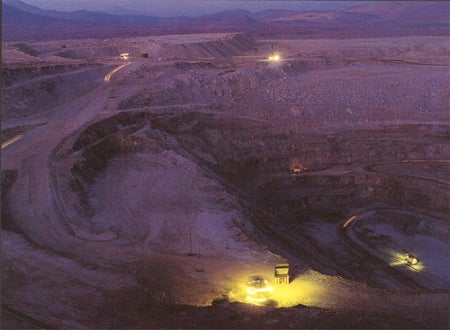 Compañía Minera Doña Inés de Collahuasi has reported that the mineral resources at its Collahuasi mine grew 19% in fiscal 2012, partly due to new drilling operations and improvements in mining design.

The new measured, indicated and inferred resource had grown by 1.4 billion tonnes to over 9 billion tonnes at an average grade of 0.81% copper and 0.02%of molybdenum in fiscal 2012.

Total contained copper metal surged by 23% to around 73 million tonnes, while ore reserves increased 10% to 3.2 billion tonnes at an average grade of 0.81% copper.

“We continue to work on bringing increased stability to our processes through operational improvements to ensure we can capitalise on this world-class resource,” Gomez added.

Located at the Andean plateau of the Tarapacá region in tnorthern part of Chile, Collahuasi is the fourth largest copper mine in the world.

Following a tough 2012, Collahuasi is planning to turn the corner – the mine was hit by several issues such as work stoppages, fatal accidents and heavy rains.

Collahuasi is now planning to double its annual production following the successful results in 2012.

The mine contains total estimated mineral resource of 7.6 billion tonnes at an average grade of 0.8% copper.

The mine is operated by Compañía Minera Doña Inés de Collahuasi, a joint venture company with Xstrata and Anglo American holding 44% stake each.

A group of Japanese companies led by Mitsui owns the remaining 12% interest in the operation.

Image: Collahuasi mine reported 19% growth in mineral resources to over 9 billion tonnes at an average grade of 0.81% copper and 0.02%of molybdenum in fiscal 2012. Photo: Xstrata plc

21 Jan 2021
Registration is disabled.
We use cookies to ensure that we give you the best experience on our website. If you continue to use this site we will assume that you are happy with it.ContinueLearn more