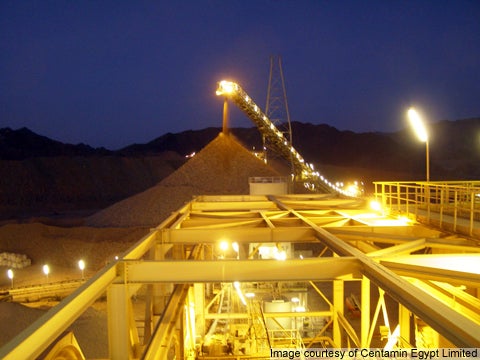 Mining firm Centamin said the total gold production at Sukari gold mine in Egypt increased by 39% to 84,757oz during the third quarter ended 30 September 2013.

Production for the quarter was, however, down 9% from the 93,624oz produced in the second quarter of the year.

Centamin said the run of mine ore stockpile balance increased to 1.54 million tonnes from 346,000t at the end of the period.

Quarterly throughput at the Sukari process plant was a record 1,463kt, a 46% increase on the period in the previous year and a 3% increase on Q2 2013;

The company noted that the mine crossed the nameplate annualised rate of five million tonnes for the third successive quarter with continued high levels of productivity and availability.

"Whilst we expect some impact in Q4 on plant throughput from the commencement of Stage 4 commissioning activities, we are now well placed to exceed our initial full year 2013 guidance of 320,000oz, provided on 14 March 2013," El-Raghy added.

The Sukari gold project, which occupies an area of 160km², is situated in the eastern desert of Egypt, about 23km south-west of Marsa Alam, a coastal town near the Red Sea.

Image: The Sukari project is Egypt’s first large-scale gold mine.