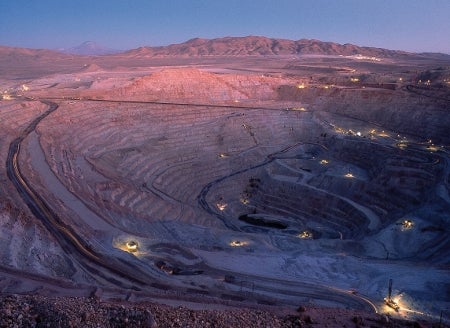 Australian mining major BHP Billiton has recorded a 70% increase in its copper in concentrate production from Escondida, Chile, for the six month period ending 31 December 2012.

The increase in production was attributed to the transition to higher grade ore feed and the completion of large scale maintenance programmes, which improved concentrator throughput.

Production from Escondida is estimated to rise by 20% for the full 2012-13 financial year.

BHP also expects its Olympic Dam smelter in Australia to return to full capacity during the March 2013 quarter.

Iron ore output for BHP from Western Australia totaled 81.962 million tonnes, a 2% increase from the corresponding period in 2011.

The company’s Western Australia Iron Ore (WAIO) business had benefited from a decade of investment in supply chain capacity, said BHP in a statement.

"Our Pilbara operations achieved another significant milestone during the December 2012 quarter with first ore received by the recently installed fifth car dumper at Finucane Island.

BHP estimates a 5% increase in production at WAIO for the full 2012-13 financial year, generating 183 million tonnes of iron ore.

The company also reported an increase in alumina and aluminium production, while nickel output declined by 6% from the third quarter of 2012.

Uranium production from the Olympic Dam mine improved by 8%, resulting from higher recoveries associated with improved plant availability in the half year ended December 2012.