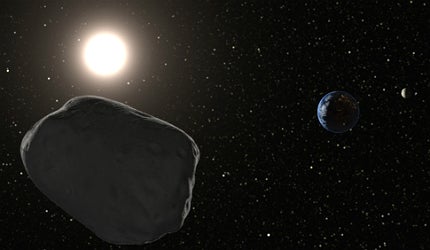 A huge deposit of rare diamonds, which was kept secret by the Soviet Government for almost 40 years, has been declassified, but what experts claim to be the richest diamond field in existence could have a serious impact on the price per carat, should mining operations ever begin.

The 100km Popigai meteorite crater in Siberia, which contains "super hard diamonds", was formed when an asteroid hit the border of Krasnoyarsk and Yakutia 35 million years ago.

The Soviet Government discovered the deposit in 1970s, but it’s only now that documents have been disclosed, revealing the true extent of the hoard of diamonds, which scientists say are "two times harder than regular ones".

According to Russian news agency ITAR-TASS, the crater was kept a closely guarded secret during the Soviet era as the government opted to develop plants to produce synthetic diamonds.

As a result, any studies on the field were stopped and data was classified.

"Diamonds with similar features have not been discovered anywhere else in the world."

The veil of secrecy was finally lifted in the third week of September, and Moscow permitted scientists from the Novosibirsk Institute of Geology and Mineralogy to talk about it with Russian journalists.

Nikolai Pokhilenko, the institute’s director, told ITAR-TASS: "The first results of research were sufficient to talk about a possible overturn of the entire world market of diamonds."

"The resources of super-hard diamonds contained in rocks of the Popigai crypto-explosion structure, are by a factor of ten bigger than the world’s all known reserves. We are speaking about trillions of carats, for comparison, present-day known reserves in Yakutia are estimated at one billion carats," added Polhilenko.

The so-called "impact diamonds" are not expected to affect the gemstone market, but are said to be useful for industrial and technological use due to their abrasive features and large grain size.

In fact, diamonds with similar features have not been discovered anywhere else in the world, and Russia is expected to become a monopoly owner of unlimited supplies of this raw material.

"No value" in mining industrial diamonds

Russia could now supply diamonds to "the entire world for 3,000 years", according to Pokhilenko.

"The market already has a more easily-accessible substitute for this material: lab grown industrial diamonds."

But how valuable are these Russian reserves? Currently, the cost of mining far outweighs the asking price for industrial diamonds, and profits can only be made from selling gemstone diamonds.

Furthermore, the market already has a more easily-accessible substitute for this material: lab grown industrial diamonds.

Tim Worstall, fellow at the Adam Smith Institute, a think-tank based in London, UK, agrees. "I wouldn’t doubt at all that there are the reported trillions of carats of diamonds in that asteroid impact crater. However, I am a great deal less convinced that the find will be of any value: or that it will ever be mined," Worstall said in an article published in Forbes.

The Siberian branch of the Russian Academy of Sciences said in a statement that further studies will be carried out to assess economic aspects of the crater’s exploration.

Pokhilenko said his institute is planning to send an expedition to the structure in partnership with Russia’s state-controlled diamond mining company Alrosa.

Out of this world: mining asteroids in space

Talk of mining asteroids directly is nothing new. In May 2012 Planetary Resources – a newly launched space company made up of Nasa scientists Chris Lewicki and Tom Jones and space entrepreneurs Peter Diamandis and Eric Anderson – said it wants to mine near-Earth asteroids for platinum and gold within ten years.

Film maker James Cameron will act as a company adviser, while Google’s Eric Schmidt and Larry Page are among the billionaires who will invest in the project.

But again, experts are not convinced about the economic feasibility of this scheme.

They say mining asteroids will not be cost effective, even with platinum and gold valued at $1,600 an ounce. An upcoming Nasa mission to return just two ounces of an asteroid to Earth will cost about $1bn.

Planetary Resources is embarking on a quest to mine asteroids. The company, made up of space scientists and billionaire investors, hopes to capture the most metal-rich orbiting objects and extract their resources.

Launched in 1958, the Mirny diamond mine is the deepest open pit diamond mine in the world. The mine is 525m deep, 1.2m wide and has a diameter of 1,200m. Operated by Alroso, the mine yielded approximately two million carats of diamonds annually, when in operation.