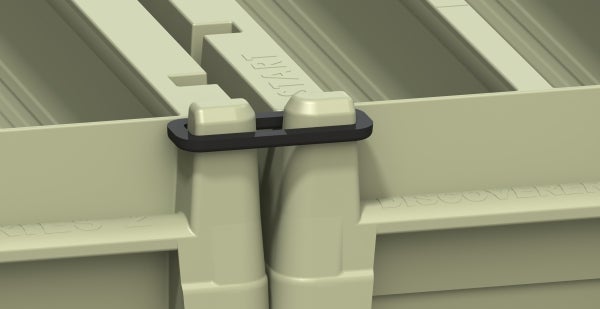 Have you ever suffered a burn injury from picking up a hot galvanised core tray or box?

Have you ever sustained a manual handling injury using a core tray or box that has poorly manufactured handles or, worse still, no handles at all?

You may have experienced trays boxes sliding off a pallet causing you a near miss incident and having to re-stack the core samples?

Has your boss ever warned you of the consequences for the next time your core trays or boxes do not maintain the core integrity?

Ever been in the unfortunate situation where several inferior quality core boxes or trays have broken?

Have you had the unfortunate situation where your fingers have suffered a grazing injury from the core getting jammed in the row of a tray or box?

If you answered yes to any of these questions then you need to start using the Discoverer® core trays / boxes.

The Discoverer core tray / box is made from high-grade polypropylene that remains cool to the touch.
Discoverer core trays / boxes are light with moulded, comfortable and safe handles, making it easy for a one or two person lift.

The Discoverer is the only core tray / box that stacks and nests, which provides stability once filled with core and can be easily palletised on-site. The trays don’t require hazardous metal strapping due to their original locking links to secure the trays in place.

Discoverer core trays / boxes do not corrode and the core samples do not touch once stacked, maintaining core integrity at all times.

Tough, durable polypropylene and UV stabiliser is used in the manufacturing process ensures a strong tray reducing the risk of breakage.

The Discoverer core tray / box has been used in the field since 1995. With more than 20 years of proven use in the field why would you risk using anything else?

Total Plastics Solutions is proud to announce the introduction of a brand new robot into...

Total Plastics Solutions are plastic injection moulders with over 30 years' experience in the plastics...

Total Plastics Solutions are plastic injection moulders with more than 30 years' experience in the...