The world needs a green city revolution. Cities may account for less than 2% of the Earth’s surface, and yet, according to UN research, they collectively put out more than 60% of greenhouse gas emissions while consuming 78% of the planet’s energy.

GlobalData’s mine-site technology surveys investigate the degree to which mines across the globe have invested in a range of technologies, spanning mine management software, predictive maintenance, drones, autonomous vehicles, collision avoidance, wearables, remote control vehicles and more. In this report, we compare the overall investment trends by technology as well as by region and key country, by type of miner – major or non-major – and by mine type. We also compare results from the most recent survey, conducted between December 2021 and February 2022, with previous surveys. Have a look at our report and gain insights into: Read this report to formulate winning business strategies for the road ahead.
by GlobalData
Thank you.Please check your email to download the Report.

The revolution will probably not be galvanised, coming through at the almost-imperceptible rate at which cities around the world are becoming smarter. Nor is a smart city necessarily a sustainable city. A late 2019 report by the Environmental Industries Commission (EIC) revealed that “only a small proportion of smart city activity was focused on environmental issues”, finding 20% from a sample of current smart initiatives to be environment-related.

What will quicken the green city pace of innovation though are smart grids and electric vehicles – two intertwined technologies that are becoming ubiquitous in cities around the world.

Analysis
How sustainable is the mining industry?

Smart grid tech help electricity grids to respond digitally to electricity demand patterns, as a GlobalData report on smart grids in power explains. These patterns can change rapidly among larger populations. IT and communication modules, including control systems and automation, enable smart technologies to merge and smarten the grid. This in turn optimises power generation and distribution to serve more end users.

A lot of this tech is of the internet of things. Its impact can already be felt in homes today: Advanced metering infrastructure (AMI) for example is why customers are able to pay less for night time and low-peak energy consumption. Smart apps in the home make grids smarter too, turning off devices when users aren’t present. Electric and digital devices, whether smart or not, can all be networked together in modern homes.

Microgrids are even more useful in the front line defence against power disruption. Combined with a power electronic interface, a microgrid is a completely self-sufficient network which, in an emergency, can operate independently of the central grid. This island mode came in useful for one district in the Japanese city of Sendai, which managed to maintain working power during the 3/11 earthquake thanks to microgrid presence, showing the strength of city smart grids.

Charging points for electric vehicles (EVs) offer a visible infiltration of smart green power in the city. Plug-in Hybrid Electric Vehicles (PHEV) rely on smart grid tech to get their charge from power utilities, and also allow car owners to supply electricity back to the grid with the energy stored in their car batteries, or by reducing charging frequency.

This vehicle-to-grid (V2G) tech as it’s called is good for the green city, helping to store the amount of energy generated from renewable resources so that it can be sent back to the grid as required by the utility.

EV charging infrastructure is growing worldwide, bringing with it movement in the smart grid theme. According to IEA, the number of publicly accessible chargers increased by 60% in 2019 compared to 2018. The growth was, as GlobalData notes, mainly driven by China due to its dense city areas with less opportunity for private home charging.

In response, two of China’s major power utilities are ramping up spending on EV infrastructure, with China Southern Power Grid planning to provide more than $3.6bn over the next four years into EV charging infrastructure. Competitor State Grid plans to build around 78,000 new charging points, involving 53,000 EV charging sites in private residential buildings and 18,000 dedicated for public use.

Second behind China in the EV stakes is the US, which is offering incentives in more than half of the country’s states. India, Indonesia and Brazil meanwhile are forecasted to see a steep rise in public EV charging.

It remains worth bearing in mind though that V2G is a clean solution and a solution to the energy conundrum that EVs bring to cities. As GlobalData reminds us, the scale of the increase in the number of EVs in cities has implications for their electricity grids. In Amsterdam for example, EV requirements could bring five-fold increase to the load on its electricity network within peak hours.

In response, charging stations in Amsterdam generally provide less output in the evening when households need more electricity. They then ramp up their output at night when energy consumption is low. This is down to a smart charging network which can adjust its charging speeds to energy demand and the amount of energy available at any given time in the city, all thanks to smart grid capabilities.

That Amsterdam plans to ban all petrol and diesel vehicles from city streets by 2030 also offsets the EV conundrum, and would be a wise move to follow by any other metropolis wanting to become a green city whilst managing EVs’ energy toll. 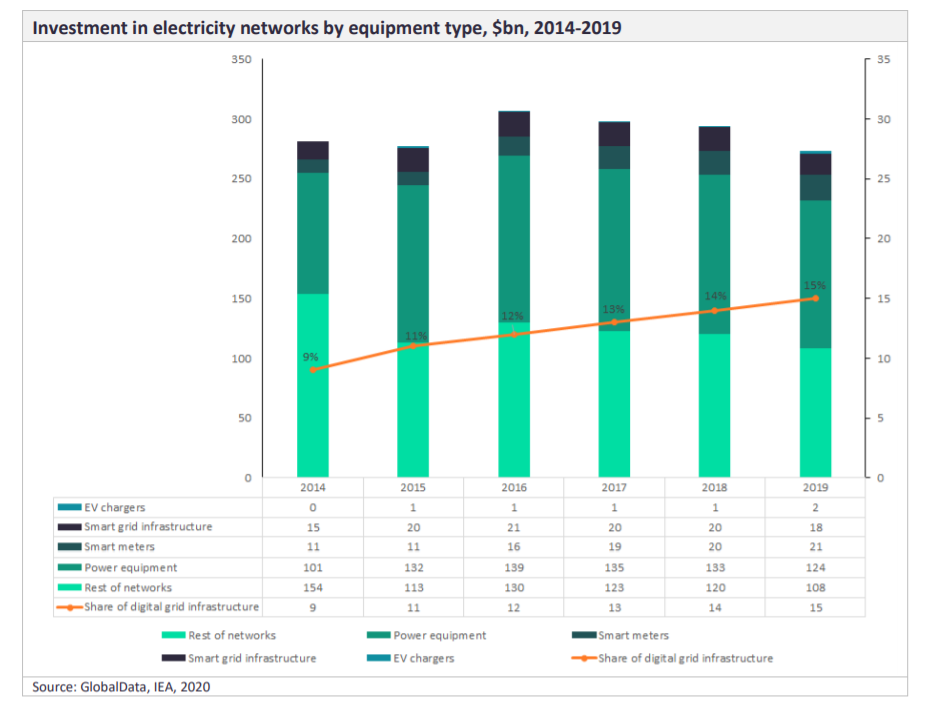 “The current trajectory of smart grid investment is at the risk of being inadequate to that of what is actually required to support the growth of renewable energy sources and electrification,” GlobalData’s analysts note in their recent smart grid report.

While China may be leading on the EV front, the US has led in smart grid deals as a whole for the last two years. Using GlobalData’s deals data, which excludes deals in the EV sector, the total of declared values for completed deals was $1.2bn in 2019. For last year, it stood at $117m, a drop of 90%.

Some of this money in 2020 came from capital raises for smart metre startups such as SparkMeter, which raised $12m in a Series A round. AI-powered smart grid disruptor Powerclove meanwhile secured $6m in venture funding.

GlobalData’s research on global industry trends across 2019 and 2020 shows smart grid deals in the power and utilities sector declined by 15% as relevant deals dropped from 13 to 11.

Construction and technology smart grid deals worldwide both rose by 75% in the two financial years to seven deals in 2020 from four in 2019, showing the natural resilience of the latter sector to major disruption.

Away from the smart-and-green city sector, the industrial goods & machinery sector saw a 150% jump with two deals to five over the period. Oil and gas deals investment remained stable in smart grids with 12 deals per year, perhaps surprising considering the industry saw less demand during Covid. Mining remained similarly stable with one deal per annum.

With cities consuming so much of the world’s energy, it is clear how important their use of smart tech and energy efficient solutions is to global sustainability.

GlobalData’s thematic research on smart cities forecasts the market to grow to $231bn by 2024. The smart city market breaks down into five constituent parts, with the biggest growth coming from smart metering, inclusive of smart grids. The smart metering market is expected to grow at a compound annual growth rate of 2.3% between 2019 and 2024 to reach nearly $122bn.

GlobalData recommends overall global grid spending should “rise by around 50% over the next decade in order to attain long-term sustainability goals” and that, in addition, spending on digital grid infrastructure should also surge, especially with the ever-expanding prominence of environmental, social and corporate governance (ESG).

This will be the only way cities not only get smarter, but greener in a faster fashion. The world may thank them for it.

GlobalData’s mine-site technology surveys investigate the degree to which mines across the globe have invested in a range of technologies, spanning mine management software, predictive maintenance, drones, autonomous vehicles, collision avoidance, wearables, remote control vehicles and more. In this report, we compare the overall investment trends by technology as well as by region and key country, by type of miner – major or non-major – and by mine type. We also compare results from the most recent survey, conducted between December 2021 and February 2022, with previous surveys. Have a look at our report and gain insights into: Read this report to formulate winning business strategies for the road ahead.
by GlobalData
Thank you.Please check your email to download the Report.
SUBSCRIBED