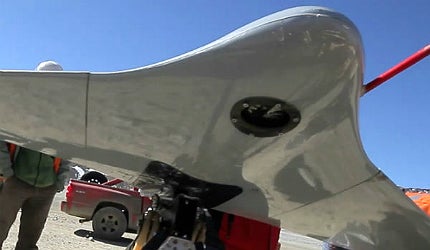 Last month, workers employed at the Los Pelambres mine, the world’s fifth-largest copper deposit with an estimated 2.1 billion tons of untapped reserves, arrived for work as usual, unaware that a thousand or so feet above them in the rarefied mountain air of the Chilean Andes, history was being made.

An unmanned aerial vehicle (UAV) developed by Slovenian manufacturer C-Astral Aerospace succeeded in relaying precise orthophotos and a detailed digital terrain map (DTM) of the entire mining area to an ergonomic ground station – all from an altitude of 4,150m above sea level.

For aerospace designer Nejc Trost and his colleagues at C-Astral Aerospace, the record-breaking mission by the Bramor UAV was the triumphant culmination of a journey of discovery that began back in 2005, and provided further proof that unmanned technology has the potential to make conventional aerial geographic mapping obsolete.

"The Bramor UAV is a direct result of C-ASTRAL Aerospace’s aviation knowledge and innovation, groundbreaking aerodynamic design, and giant strides made in unmanned technologies," Trost enthuses.

"All of the UAV’s features – from the blended wing body and modular airframe to the high-precision onboard telemetry -are designed to be as simple and user-friendly as possible, but provide the best performance. It’s one very smart drone."

The fully autonomous flight over Los Pelambres was just one of a series of high-altitude operations performed by the Bramor system in Chile during a period of ten days, including a linear mission that mapped the entire transportation system for the copper ore – from the mine to a separation facility at La Planta and on to the port of Los Vilos – in just two flights. Every day, the pipeline transports more than $10m of copper through mile after mile of inaccessible terrain.

"Los Pelambres is a huge area; 120km long and covering more than 50 square kilometres," Trost tells me from C-Astral Aerospace’s US office in Houston, Texas. "Around 30 people are in the field all the time taking different measurements, but it’s a difficult job and very dangerous. It is impossible to monitor it all on foot because of the threat of avalanches."

The aerial missions provided the mine’s sub-contractors with invaluable logistical and topographical data about the landscape and its potential deposits, all at a fraction of the cost of conventional surveying techniques and at little or no risk to employees.

"This real-time data is crucial to mining operations and the safety of personnel on the ground depends on it," says Trost. "Aerial mapping will make the work of Geosupport and Pixer, our partners and distribution companies in Chile, much safer and more economical. Orthophotos, DTMs and volume calculations will be much more precise and can now be compared with existing survey data taken from devices such as ground lidars."

Better by design: specifications of the Bramor UAV

Five rival companies had already tried and failed to reach an altitude of 4,000m in Los Pelambres by the time the team from C-Astral Aerospace arrived. The mine’s executives were ready to give up on unmanned technology, but, as Trost explains, the Bramor UAV is not your average automated system.

"Its light and durable construction offers efficient aerodynamics and stability, and the lowest possible T/O weight," he says. "The airframe is manufactured with CAD / CAM technology from advanced composite materials [kevlar, carbon and vectran], allowing for a high level of survivability as well as multiple payload combinations and endurance / range options.

"The UAV’s sensor modularity incorporates an electro-optical (EO) or thermal turret, a 24 megapixel digital single-lens reflex (DSLR) calibrated camera and advanced environmental monitoring sensors. The whole system, including the ground control station, is small enough to fit into a backpack, can be safely operated by one pilot, and is flight-ready in less than five minutes," he adds.

Concerns about the functionality of the UAV at unprecedented altitudes and in the face of a harsh Chilean winter also proved to be groundless.

"The main aerodynamic challenge at such altitude was air density," says Trost. "We had to increase airspeed in order to produce the same degree of lift as we would at lower altitudes, but that had no effect on either the surveying mission or the image quality. Bramor had been tested in harsh weather conditions in the Arctic and Antarctic, and prior to our arrival in Chile we had performed a successful 3,100m flight in Slovenian airspace. From that flight data we knew that we could achieve 4,150m without a problem."

"The conditions for production in Slovenia are good and our civil aviation authorities (CAA) are very cooperative, allowing us to fly and test drones in visual flight rules (VFR) airspace," Trost says.

The issue of accepted standards and protocols – or the lack of them – governing the safe use of UAVs in civilian airspace has been the most salient issue affecting the industry since its emergence in the 1980s, yet the benefits of unmanned technology to both the public and private sector remain undeniable.

Without the maintenance and staffing costs of helicopters and light aircraft, UAVs are cheaper and more environmentally-friendly to run, and require less to launch, mobilise, set up, relocate and refuel. In addition, flight times for pilotless aircraft are not limited by the maximum time a pilot is allowed to fly; the Bramor UAV, for example, can remain airborne for nearly two hours.

It is no surprise, then, that cash-strapped air forces, as well as private sector mining companies, are increasingly turning to the commercial aerospace market and specialist technology providers, such as C-Astral Aerospace, in search of economies of scale, new equipment and systems support.

"Since the economic crisis, companies are looking for alternative, cost-effective technologies, which have tremendous advantages compared with conventional mapping," confirms Trost.

With UAV technology gradually penetrating the aviation mainstream – unmanned drones are now being employed by everyone from police forces in the US to anti-poaching authorities in Africa – C-Astral Aerospace’s stock looks set to rise still further with the arrival in Q1 2013 of its new Bramor GHY system.

The next-generation UAV will carry a state-of-the-art ‘hyperspectral’ imager, developed by the VTT Technical Research Centre in Finland. The camera is the smallest on the market and Bramor will be the first platform to carry it due to its high stability and payload capacity.

"Companies that specialise in GIS now have more interest and trust in UAS technology," says Trost.

"The new hyperspectral sensor will open up UAV technology to a completely new set of industry sectors. I believe that in a few years conventional aerial geo-mapping will almost completely disappear."

With demand for copper on the up and the number of high-grade mining sites quickly falling, conventional techniques are no longer the best way to extract one of our most important resources.

Capable of carrying out precision airstrikes, combat UAVs are picking up where their unarmed counterparts left off.

Dogfighting drones – swarms of unmanned battle-bots take to the skies

Research to enable dogfights between enemy UAVs will see 100 combat drones battle it out in a 2015 competition.