Since the dawn of humanity, the world’s most dangerous minerals endangered the lives of iron age peoples. In the industrial revolution, miners quickly learned about the risks of rocks, acting as the proverbial ‘canary in the coal mine‘ for later safety advances.

Many minerals create an invisible hazard in dust form, as detailed in Reviews in Mineralogy. Broken rocks can create tiny particles with terrible consequences for health if inhaled. Most famously, the risks of asbestos mining were only discovered in the 1970s, prompting decades of litigation and hurt for the miners involved.

This unranked list gives an overview of 11 of the most dangerous minerals, based on the personal opinion of Stanford University geology professor Dr Gordon Brown.

Crocidolite was one of the least desired forms of asbestos, but it still stands as one of the world’s most dangerous minerals. Credit: James St John under CC BY 2.0.

Crocidolite, also known as blue asbestos, can cause fatal diseases such as lung and mesothelial cancer. This fibrous mineral can easily form dusts, often inhaled by those nearby.

Mining companies previously sought asbestos because of its resistance to heat and fire. Manufacturers used asbestos to make commercial and industrial products including ceiling tiles, cement sheets and insulation boards. However, crocidolite proved less resistant than other forms of asbestos, causing it to become the least desired.

Crocidolite asbestos mining occurred mostly in Western Australia, Bolivia and South Africa. Production has since ceased due to the serious health risks posed to miners and consumers. Across the world, many thousands of miners have had their lives shortened by asbestos exposure.

In Western Australia, the mineral has also literally erased towns from the map. Crocidolite mining in the town of Wittenoom caused more than 2,000 residents to die of mesothelioma and other asbestos-related diseases. The government forcibly evicted the last residents and removed the town from maps to deter tourists seeking “The most dangerous town in Australia“.

A sample of phosphorite, which contains hydroxyapatite. Credit: James St John under CC BY 2.0.

Hydroxyapatite, also known as hydroxylapatite, can block blood flow when it builds up inside heart valves and arteries. However, the chemicals in the stone can be important in tooth enamel and bone formation.

The mineral belongs to an apatite group of phosphate minerals, making it useful for fertiliser production. The chemicals within also have uses in the chemical and pharmaceutical industries. Mining companies developed commercial-scale apatite mines in the US, North Africa and Russia. In the last of these, miners named a town in Murmansk Oblast after the mineral.

The International Mineralogical Association refers to the mineral as Apatite-(CaOH). This distinguishes it from the other two variants of Apatite, Apatite-(CaF) [Fluorapatite] and Apatite-(CaCl) [Chlorapatite].

Tiny crystals of Erionite can be damaging to human health. Credit: Leon Hupperichs under CCASA3.0.

Erionite naturally occurs as a fibrous mineral, often found in volcanic ash. When disturbed, erionite fibres can become airborne and act in a similar way to asbestos fires. Exposure can cause cancers such as lung cancer or mesothelioma. Some regions of Turkey have faced persistent problems from the mineral.

Erionite belongs to a group of silicate minerals called zeolites. Deposits have been identified in at least 12 US states. Although Erionite mining ceased in the late 1980s, exposure to the deadly mineral can occur during the production and mining of other zeolites. Industries still use these minerals for their ability to selectively adsorb  chemical molecules from liquids and gases. 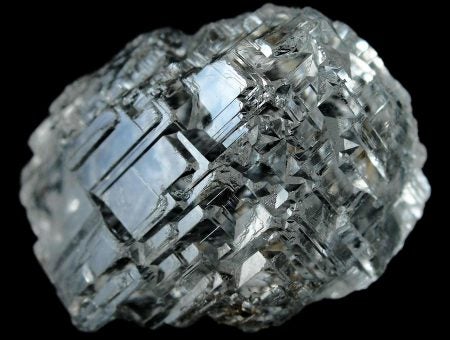 Beryllium is one of the smallest chemical elements around. Phenacite contains relatively large amounts of it. Exposure to this can induce lung cancer and severe lung inflammatory diseases including berylliosis and chemical pneumonitis.

Traditionally, manufacturers used beryllium as a base material in ceramics, special types of glass and in fluorescent tubes. Currently, its use is limited to making metals and alloys for computer hardware, telecommunication equipment, windows for X-ray tubes, gyroscopes, missiles, and rockets.

Formerly used as a gemstone, miners excavate phenacite in both crystal and granite forms. Mines near Yekaterinburg in Russia’s Ural mountains produced phenacite in large crystal forms. The mineral is also found in Colorado, US, Minas Gerais in Brazil, as well as in Madagascar, Myanmar, Norway and Zimbabwe.

Rubies embedded within a sample of K-Feldspar. Credit: James St John under CCBY2.0.

Potassium feldspar or K-Feldspar belongs to a group of potassium aluminium silicate minerals, including orthoclase, microcline and adularia. The mineral contains small quantities of radioactive uranium that slowly forms radon gas, a major cause of lung cancer.

K-Feldspar is also a major source of lead emissions. The mineral can be used to manufacture glass and ceramic products, artificial teeth and scouring powders. Some varieties of the mineral can also be used as gemstones.

Chronic exposure to chrysotile (white asbestos), the most commonly found asbestos on, leads to progressive lung diseases causing stiffening of the lung tissue.

Significant deposits of chrysotile asbestos are found in more than 60 countries including Russia, which holds the world’s biggest chrysotile deposit. More than 50 countries have banned mining of this hazardous asbestos variety.

Russian mines produce the most chrysotile, followed by those in China, which consumes the greatest amount. The mineral still has uses in producing vehicle braking systems, asphaltic roof coatings, and gaskets. Brazil, India and other developing countries also use asbestos as a roofing material.

Several minerals in this list have towns named after them. However, the severe negative associations of asbestos caused Canadian town of Asbestos to change its name in an attempt to remove the link. The town, now Val-des-Sources, previously hosted the world’s largest chrysotile mine, which stopped operation in 2011.

Silicosis, lung cancer, kidney disease and immunological problems are caused by exposure to a fine particulate form of quartz. Silicon dioxide, the second most abundant mineral in the Earth’s continental crust, naturally forms as quartz.

Quartz occurs in different forms including silica sands, crystal, stones, and tripoli. It has commercial applications in hydraulic fracturing for the petroleum industry, as well as in the production of electronics and optical products. Most commercial quartz is cultured from seed crystal known as lascas, while natural quartz crystals are used as gemstones.

Fluorine is a relatively soluble and highly reactive found within fluorite. Exposure to the chemical can lead to a severe bone disease called skeletal fluorosis, which weakens bones. In China, coal mining has caused more than 20 million people to suffer from fluorosis.

Fluorite, also known as fluorspar, occurs in large veins in a variety of ores and crystals, including iron, coal, and copper. It has uses in the production of certain glasses, enamels, and scientific equipment lenses. It can also be used to produce flux for smelting, and in ornaments and lapidary works.

Galena may look dull, but it can have deadly side-effects. Credit: Saleta.

Most lead miners seek galena ore, a lead sulphide mineral that also proves a reliable source of silver. The rock has a relatively low solubility, meaning that it does not easily dissolve into water. Often, it forms as a crystal.

When galena contaminates the wider environment, it can cripple the development of nervous systems in foetuses and children. In adults, galena can cause cardiovascular disease.

Weathering galena forms two by-products, cerrusite and anglesite. These present a risk of pushing more lead into the wider world.

Galena deposits are found in the US, UK, British Columbia, Germany and Australia. Two US states recognise galena as their ‘state mineral’, and a former mining town in Kansas took the name of the rock. Silver mining from galena ore occurs elsewhere in the US.

Pyrite, often known as fool’s gold, can be one of the most dangerous minerals. Credit: Stacie Da Ponte under CCBYSA2.0.

In some ways, the sulphide mineral pyrite has the opposite problem to galena. Composed of iron and sulphur, pyrite can contaminate ground water and streams via tailings waste from mines. Oxidation of pyrite releases toxic metals and metalloids such as arsenic, a poisonous element. Coal veins often contain pyrite with arsenic. The mineral poses a severe health problem for millions of people, such as those in the Guizhou province in China.

The sulphur in pyrite reacts with water to form sulphuric acid. Chemical companies used to produce this from pyrite ore, but now the useful chemical comes from a by-product of natural gas and crude oil processing. This has caused pyrite’s economic value to plummet, and miners now only extract the mineral for specimen purposes. 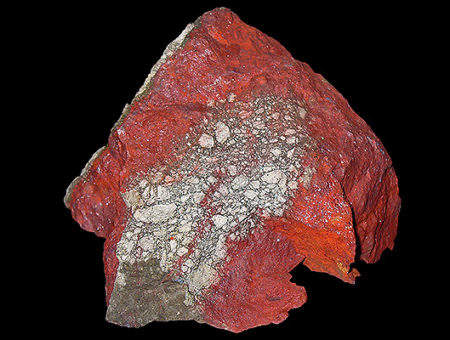 Cinnabar is the most common source of mercury. Credit: H Zell under CCASA3.0.

Cinnabar combines the acid-forming hazards of sulphur with poisonous mercury, earning it a place among the most dangerous minerals. When oxidised, the mineral produces toxic compounds of mercury that cause developmental and nervous system disorders in foetuses and children.

Cinnabar has a bright red or brownish-red colour, and very low solubility. It occurs as grains and crystals, and usually forms near volcanic activity and hot springs. Cinnabar was used to produce bright orange pigment on ceramics, murals and tattoos in ancient times. In recent years, extraction has fallen due to decline in global demand for mercury. Nowadays, most cinnabar mines lie in Spain, China, Kyrgyzstan and Algeria.