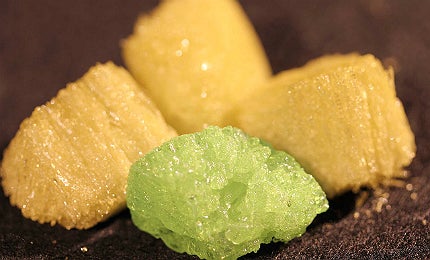 Blockbuster video game Black Ops II last year enthralled gamers, with its premise that the world could be brought to the brink of war over China’s dominance of rare earth minerals (REM).

The premise is based on the scarcity of these minerals which are used for, among many other things, powerful batteries, camera lenses, MRI scanners, modern electronics, such as iPods, TVs and computers, and for renewable energies, such as solar panels and wind turbines, meaning they are integral to modern life.

Although obviously far fetched, at its inception Black Op II’s narrative didn’t seem so implausible. For many years, China had been responsible for producing 97% of all REMs. In recent years it has been known to use its monopoly of the industry as a geopolitical weapon, and to drive up the price of REMs. However, more recently China’s dominance has diminished and in November last year, the country closed its largest mine, Baotou Steel mine, in a bid to maintain falling prices.

As a direct result of China’s tactics, the exact opposite to Black Op II’s narrative has occurred – the world hasn’t fought China for its REM riches, but found its own.

Just recently, two REM companies, Molycorp and Lynas, have come online and reserves of REM have been discovered all over the world. A 2011 British Geological survey outlines 74 potential deposits worldwide.

In January, the US Department of Energy announced it will invest $120bn in a Critical Materials Centre which is, according to its director Alex King: “Spurred by the rare earth crisis, in 2010 – 2011, when the price went up by a factor of ten, maybe 20” and because: “They [China] also showed a willingness to use the availability of rare earths as a tool of international political relations”.

Meanwhile, in China, Baotou Mine has announced it is expecting its 2012 profits to falls by between 50 and 60%.

He adds: “Once China decided to throw its weight around, of course, the incentive was to get into the business. Which is exactly what has happened.”

Which leads to another important myth about REMs; they are not actually rare. “Several of the rare earths are individually as common as copper on this planet. We produce millions of tonnes of copper a year,” says Worstall.

Now, in 2013, the REM market has been blown wide open, with Molycorp and Lynas leading the way. There are also estimated to be another 400 small REM companies looking to exploit rare earth deposits all around the world. Below is a detailed examination of where they might find them.

US – racing towards diversified supply

“China’s dominance has diminished and in November last year, the country closed its largest mine, Baotou Steel mine.”

Before China, America supplied most of the world’s REM needs, when it opened Mountain Pass mine in the 1960s. The mine closed in the 1990s due to poor market conditions but, as of January this month, it has come online again under Molycorp as Project Phoenix. The company, which bought the mine in 2008, said it expects to reach or exceed its phase I run rate of 19,050 metric tonnes per year (mt/year) of rare earth oxide equivalent (REO) by mid-year, before moving onto phase II, which will see as much as 40,000 mt/year of rare earth oxide equivalent produced.

The US will also use its new $120m Critical Materials Institute, located in Ames, Iowa, to diversify supply and to ensure, says King: “Whatever vulnerability a single source has, whether that be geopolitical or environmental…our goal is to make sure multisources can operate…[and] to try and address the technical barriers, which obviously become economic barriers.”

Any breakthrough research discovered at the centre will be available to companies wanting to invest in extracting America’s REM deposits, which, it seems, there is no shortage of. For example, Ucore Rare Metals Inc plans to commence construction of a mine located 60km south-west of Ketchikan, Alaska, where it discovered Dysprosium, Terbium and Yttrium. It hopes to be online by 2016. Ucore CEO Jim McKenzie has said: “We view the rare-earth space as a sort of race.”

Meanwhile, Rare Earth Elements owns and is working on the Bear Lodge Project in Wyoming which, according to the US Geological Survey, is estimated to contain one of the largest deposits of disseminated rare-earth elements in North America. Other areas in the US currently being investigated for REMs are Missouri and Texas.

Jamaica – and its fruitful red mud

Jamaica’s abundant red mud is one of the latest places where REMs have been found. Jamaica’s science, technology, energy and mining minister, Philip Paulwell, told The Associated Press in January that it contains “high concentrations of rare-earth elements.”

“Before China, America supplied most of the world’s REM needs, when it opened Mountain Pass mine in the 1960s.”

Japanese firm, Nippon Light Metal, have now partnered with the Jamaican Government in a pilot project to see how financially viable the deposits are. Nippon is investing $3m (£1.9m) to develop methodology for neutralising the red mud, with the objective of extracting some of the rare earth elements.

The pilot will also map the potential impact on land, water and air and the effect of neutralising the by-products of the extraction process. Nippon Light Metal’s ultimate objective is to extract some 1,500 metric tons per annum.

Head of the Jamaica Bauxite Institute, Dr Parris A Lyew-Ayee, is quoted by the Jamaica Observer as saying: “We earnestly hope that the path to full commercial production will be cleared by this venture.”

Japan and Vietnam – partnering for a prosperous future

It is believed Vietnam has scores of untapped REM resources. In a bid to uncover and extract these resources, Japan partnered with Vietnam to build a centre for research on REMs in June last year. This follows an agreement signed in 2010 between the two countries agreeing to cooperate in the discovery of REMs.

The two countries working together will help with the production of not only Vietnam’s REMs but also Japan’s, which discovered last year that it has about 6.8 million tonnes of minerals, including dysprosium, laden in the seabed 2,000km from Tokyo.

Japan has been most affected by China’s dominance in REMs. The country imports about 60% of China’s supply, and in March last year, along with the European Union and the US, Japan submitted an official complaint to the World Trade Organisation about China’s export restrictions

Japan and Vietnam’s partnership and combined reserves could result in the two countries becoming market leaders in the supply of REMs.

Greenland is basking in the glory of significant REM finds, which it hopes will boost its economy, which is mainly reliant on fishing and tourism.

The European Commission estimates that its resources could total 9.16% of the global rare earth deposits, including large deposits of niobium, platinum, rare earths and tantalum, which are all on the EU “critical raw materials” list. In many cases the REMs are stuck beneath 150 metres of ice, but melting ice caps are making it easier for the minerals to be extracted.

Currently, European companies and China are vying to win exploration rights to the deposits in Greenland, which is not in the EU. However, Greenland has refused to rule China out of the race in favour of a European company.

On the whole, however, REM expert Worstall doesn’t see the EU as a hub for REM production, despite other finds small finds in Sweden and Norway, he says: “I think we can largely ignore anyone in the European Union. As the EU itself appears to have made processing rare earths illegal on environmental grounds.” 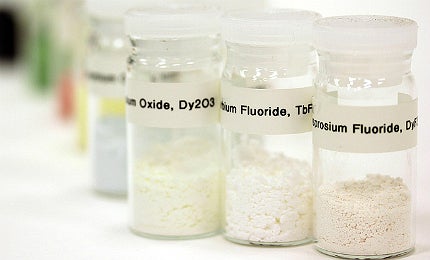 In April last year Brazilian miner, World Mineral Resources (WMR), revealed it had uncovered a large resource of neodymium in the western Bahia state. At the time it estimated that the deposit could bring into the country US$8.4bn.

Prior to this, in October 2011, Brazilian mining company, Vale, discovered deposits of rare-earth minerals at its giant Salobo copper-mine project at Carajas in Para state, north of Brazil. The discovery came after Brazilian President Dilma Rousseff asked the company to look for REMs.

However, since the discovery, little information has been released about Vale’s plans for the site or how many RAE’s were actually found. It has been estimated, however, that the copper mine will come online in 2014, but this appears to be just for the mining of copper and not REMs.

“The $100m Mt Weld project is thought to be the richest known deposit of rare earths in the world.”

REM company Lynas, in December last year, announced that it had bagged 15,200 dry tonnes of concentrate containing 5,410 tonnes of REO for export from its Western Australia facility, Mt Weld, to its refinery in Malaysia for processing.

The $100m Mt Weld project is thought to be the richest known deposit of rare earths in the world. The plant is expected to be in production for around twenty years, producing an estimated 33,000 tonnes of rare earth concentrates each year.

The plant was commissioned in 2011 and officially opened in August the same year. On the announcement of its opening, Australian politician Colin Barnett said: “As the first significant rare earth mine to be opened outside of China for many years, the Mt Weld project brings an important new capacity to Western Australia’s already diverse and globally important resources sector.”

It was decided an accompanying refinery should be built in Malaysia due to cheaper costs and 12 year tax breaks offered by the Malaysian Government. The refinery has had some opposition from environmentalists but is expected to be online by the end of this month, February 2013.

A Canadian Chamber of Commerce Report published in 2012 outlines eight mines that were being explored for REMs. The report also estimates that Canada has 1.1 billion pounds of rare earths locked in black shale deposits, worth an estimated $206bn.

“A Canadian Chamber of Commerce Report published in 2012 outlines eight mines that were being explored for REMs.”

It was thought they were non-recoverable, but due to advancing technologies this is no longer believed to be the case.

One such area currently being explored by Quest Rare Minerals is The Strange Lake Project, located 225km north-east of Schefferville, Québec. In October last year Quest announced that the area’s deposits were double what they first estimated and enough to satisfy a minimum 25-year open-pit production model.

Citing Canada’s “great geology” and “rich, rare earth deposits,” Michel Jebrak, a mineral resources specialist at the University of Quebec in Montreal, states in the Chamber of Commerce report: “Rather than being the unassuming neighbour of the United States the hunger of the world’s economy for resources may mean that Canada will increasingly have political leverage and influence.”

India is another country aiming to exploit its supply of REMs. Until 2004, India was actively involved in building its REM production capabilities, but suspended operations when it could no longer compete with Chinese prices. However, since the demand for REMs outside China has risen, it has restarted operations and has already signed an agreement with Japan to import 4,100 tonnes of rare earths a year to the country, supplying 20% of all its needs.

A 2011 British Geological Survey estimates that India has three percent of the world’s REM reserves, including both hard rock and placer deposits, with the USGS estimating the country has 3.1m tonnes worth, much of which is located along its coastline.

Just recently Indian Rare Earths (IREL), a government company, was awarded the rights to mine REMs in Odisha after a survey by the Atomic Minerals Directorate for Exploration and Research revealed that it contains deposits of REMs. It is thought India is also considering deep sea exploration of REMs.

New, automated technologies are setting the tone for a future of mining characterised by increase in production rates, safer operations and high profit margins.