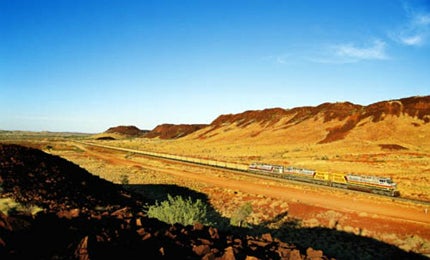 In February, the Australian government revealed that it had raised a mere A$126m ($130m) from the controversial Mineral Resources Rent Tax, compared with the forecast for $2bn in payments this financial year.

Treasurer Wayne Swan noted that the fall in commodity prices had severely hit the resources industry, which in turn hurt the tax revenues.

Since January 2013, the opposition had been seeking transparency over tax revenues following reports by The Australian newspaper that it failed to generate any revenues.

On 7 February, the Senate had passed a motion ordering the Commissioner of Taxation to reveal the total earnings the government has made since the tax was implemented.

The Australian Competition Tribunal ruled that Rio Tinto would not have to open up its Hamersley and Robe rail lines to other users.

During several years, Fortescue Metals sought to access major rail lines in the Pilbara region based on competition grounds to transport its mined ore to port areas.

Meanwhile in Russia, an underground methane gas explosion killed 18 workers in the Vorkutinskaya coal mine located in the Komi region.

Around 260 people were working 800m below the surface of the mine, operated by steel maker Severstal, at the time of the blast.

The Russian Federal Investigative Committee has initiated an investigation to identify any safety violations at the 38-year old mine.

The De Beers Group of companies said it plans to invest ZAR20bn ($2bn) to build a new underground diamond mine underneath the existing Venetia Mine in Limpopo Province, South Africa.

The underground mine will extend the life of the existing Venetia open pit until 2042, to become the nation’s largest diamond mine.

De Beers, a member of the Anglo American group, announced the investment after having secured the necessary regulatory clearances.

Also in February, nearly 50 intruders set fire to equipment, machinery and cars at the Hellas Gold mining site in the Halkidiki region in Greece.

Masked arsonists used flammable liquid and bombs to set machinery and offices alight on 17 February, as fierce opposition to the mine’s development continues.

Local citizens and environmentalists have tried to halt the project since 2011, saying it will cause irreversible damage.

The gold mine is under the operation of Hellenic Gold, a subsidiary of Canadian gold mining company Eldorado Gold.

Daw Mill Colliery, the UK’s biggest coal producer, may be shutdown indefinitely following a major fire at the underground mine in Warwickshire.

Owner UK Coal said in a statement on 25 February that it does not expect the mine to be recovered to operational status in "anything less than three to six months."

Vale writes down $5.6bn in impairment charges for FY2012

The write-downs on assets totalled $4.02bn, including $1.03bn from Australian coal assets; investment write-downs for the year stood at $1.64bn.

Defence budget cuts and a first drop in US spending since 1998 ensured military spending in 2011 didn’t exceed $1.738bn.