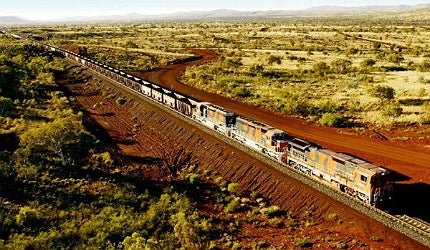 After weeks of deliberation, mining giant BHP Billiton has decided to delay the expansion of its $20bn Olympic Dam mine in South Australia over tough market conditions and "subdued" commodity prices.

The company announced in a statement that it will not be ready to approve the project before the Indenture Agreement deadline of 15 December 2012.

""Value is always our primary consideration. We believe today’s decision reflects an appropriate, prudent and disciplined course of action.""

Infrastructure, including a desalination plant, a gas fired power station, a rail line, an airport, port facilities and a village for workers were also planned under the expansion. In short, Olympic Dam would have become the biggest mine in the world.

Now, the company will investigate an alternative, less capital-intensive design to the open-pit copper expansion, involving new technologies to improve the economics of the project.

The news comes on the same day BHP reported a fall in profits for FY2012 ended 30 June 2012, for the first time in three years. Attributable profit was down 35% as demand for commodities slowed around the world, particularly in China, the biggest buyer of Australian exports.

Here, mining-technology gathers industry views on the decision to delay the expansion, including comments on how escalating commodity prices could affect big miners operating in Australia.

South Australia Chamber of Mines and Energy: "BHP Billiton’s announcement yesterday to postpone the expansion of Olympic Dam should be seen as a prudent move to ensure the project proceeds in a financially sustainable manner. For SA, resources growth outlook remains strong."

Antares Equities co-head of Australian equities Nick Pashias: "In the environment we’re in, it’s an absolutely rational decision.The copper in the ground isn’t going anywhere. Interestingly, a number of miners have — in their post-results conferences — suggested cost pressures are starting to ease so maybe the worst of the cost escalation is over.

"That’s not to say costs won’t stay high. This delay could have interesting implications for the copper price longer term because something has to give: either capital costs have to retreat or the copper price needs to rise. If new demand can’t be substituted, we’ll see a higher copper price, which will encourage supply and resurrect stalled projects." – speaking in the Wall Street Journal.

Tim Schroeders, portfolio manager at Pengana Capital, said: "It’s pleasing to see that there’s some capital discipline from the company so they are not ploughing ahead irrespective of current difficult economic conditions." – speaking for Reuters.

"There’s some uncertainty about the current environment and we want to see BHP exercise the appropriate due diligence in ensuring it generates real value from these big investments like Olympic Dam and Outer Harbor. We’re happy to see continued investment in assets including US shale, where they’re receiving a good payoff on capital invested, if it means restricting investment in long-dated projects." – speaking in the Wall Street Journal.

BHP Billiton CEO Marius Kloppers: "As with any capital commitment, all investment options are scrutinised as they move through our approvals process and our highest returning projects are prioritised. Value is always our primary consideration. We believe today’s decision reflects an appropriate, prudent and disciplined course of action.

"However, the long term outlook for the copper market remains strong and we will continue to work closely with all stakeholders as we refine our longer term development plans for this unique, world class ore body. We want to find the right solution to unlock this resource," said Kloppers.

The Olympic Dam copper-uranium mine and plant is situated in South Australia, 560km north-west of Adelaide.