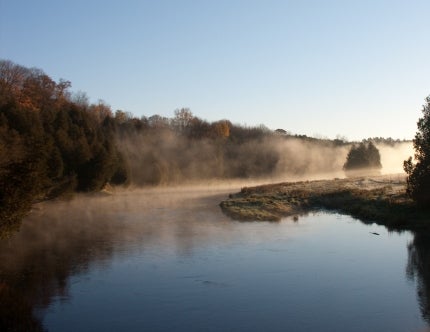 In April 2010, 150 hungry people sat down to a feast in a Canadian inn to discuss  how to master the mining, environment and transport challenges they face as they plan to exploit a massive chromite deposit which, if approved, will see Canada self-sufficient for a century in a vital ingredient of stainless steel.

The development, known as Canada’s Ring of Fire, will also transform First Nation communities whose lives are blighted by mass unemployment and squalid living conditions.

The Ring of Fire lies under 5,120km² of wilderness centred on the James Bay Lowlands; 31,000 claim units mark out the massive deposit of chromite which would end Canada’s dependence on imports of the mineral.

Examples of chromite quantity and quality are nearly 70m tons of 31.9% Cr2O3 in the Black Thor deposit and nearly 40m tons graded at roughly 40% Cr2O3 in the Big Daddy deposit. Best of all the ore can be shipped with little upgrading to steel mills.

Chairing the 150 attendees at the feast was Mike Fox, president of the Boreal Prospectors Association and co-chair of the Aboriginal Affairs Committee for the Prospectors & Developers Association of Canada (PDAC). He explains the feast: "Our aim is to show that the players are collaborating with the community, the province and its ministry, creating an enabling environment for others in the future."

"Providing employment will be the key benefit for the prominent community involved." 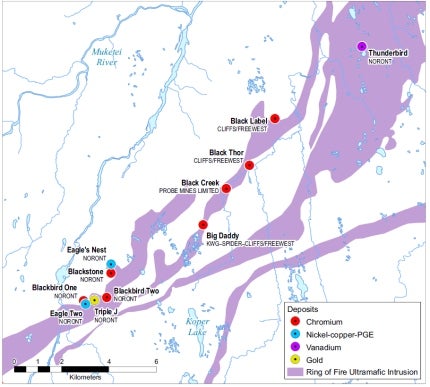 Before mining Ontario’s Ring of Fire can begin…

At its bluntest, those initiating the Ring of Fire face the challenges of raising finance, supplying power at every stage, building 300km of road/rail to a remote site, refining the product, disposing of unwanted material and most importantly, planning the entire project with the approval of the First Nations – the indigenous people of the area.

Providing employment will be the key benefit for the prominent community involved, Marten Falls, where unemployment is almost total, the distance to any urban centre is 400km (Thunder Bay), water quality is unacceptable and the only access is air transportation.

The same is true for the Webequie who live 150km north of Marten Falls where the 700-strong population is even more devastated.

On September 16th, 2010 the communities of Marten Falls and Webequie signed a Letter of Intent with the Minister of Northern Development, Mines and Forestry, and the Minister of Natural Resources outlining their mutual commitment to work together on initiatives related to the Ring of Fire and land use planning in the Far North of Ontario.

In Mike Fox’s view, "All initiatives in the project will be subject to a planning regime but we don’t know what it will be like. It will need to be defined and then approved, notably in the matter of a regional infrastructure and First Nation involvement and if one community does not want the railway…", the implication is that agreement will be needed on each aspect of the project.

First Nations’ responses have, in fact, been varied. At their most striking, the two communities blocked the runways at the Ring of Fire exploration camps for two months. It must be stressed that Marten Falls Chief Elijah Moonias is not opposed to the mining per se; he is determined that his community benefits to the utmost.

The question remains as to whether rewards for the First Nations will be as great as they would like.

Webequie Chief Cornelius Wabasse declared in the local Matawa Messenger, "I now feel assured that we have sent a very powerful message to the government and the mining and mineral industry. If there is going to be any business on our lands, we are going to play an active role throughout the entire process."

"The question remains as to whether rewards for the First Nations will be so great."

Mike Fox sets out his own theoretical roadmap to engage all parties, "The foundational pieces to the collective success of the Ring of Fire will be First Nation early stage engagement, collective involvement, deep participation and long-term partnership."

"The Ontario government needs to assist First Nations with geo-science within their land use planning’s Terms of Reference, particularly those First Nations affected by the visionary platforms associated with the Ring of Fire."

"The key to community acceptance of any development process will be the land-use planning tool that has to take into consideration development initiatives, and not just traditional ecological knowledge and Ministry of Natural Resources-led regional bioscience studies."

The players and the population

There are currently over 30 companies exploring in the Ring of Fire, including Cliffs Natural Resources, Freewest Resources, Spider Resources and Noront Resources.

Noront states that it is the dominant land-holder in the Ring of Fire and that it will continue to delineate and prove its discoveries with appropriate reports. On June 16 2010 Noront signed an exploration agreement with the Webequie First Nation, an example of how commercial interests can work with local communities on traditional lands.

The agreement, inter alia, sets out protocols for exploration on these traditional lands and stresses Noront’s desire for a subsequent Impact Benefit Agreement. Noront is also seeking a similar MoU with the Marten Falls; the exploration agreement was signed in April 2009.

The complex task of constructing the Ring of Fire regulatory roadmap falls to Christine Kaszycki, Ontario’s Ring of Fire co-ordinator who provided an update on the project:

"Companies such as Cliffs Natural Resources, Noront Resources and KWG Resources are continuing their work on evaluating their respective projects. Noront Resources released a technical report on October 25 2010 that outlines its development plans. Cliffs Natural Resources is currently undertaking pre-feasibility studies that will inform project planning decisions as we move into 2011. KWG Resources is currently undertaking geotechnical studies for its proposed rail corridor."

The environment within Canada’s Rign of Fire

"It is a given that environmental groups will oppose development, even if the proposed development can bring community employment, enterprise development and wealth creation for Ontario First Nations as a way to eliminate the poverty levels," states Fox, summing up a state of mind all too prevalent when mining is mentioned within earshot of environmental lobbies.

"There is no doubt that the project brings both enormous promise and challenges for all."

The view of Anna Baggio, of the Wildlands League, a chapter of the Canadian Parks and Wilderness Society is keen to point out the negative side:

"Mining activities are superseding the protection of ecological and cultural values. There is very little government oversight, no environmental assessment process and no mechanism for First Nation control."

"And for good measure, Ontario Nature is not far behind… there has been an escalation in…the Ring of Fire…shattering once pristine habitat and home to species found in few other places in the world…the Ring of Fire threatens an environmental disaster that could be likened to a mini tar sands."

The last words are Fox’s: "There is no doubt that the Ring of Fire brings both enormous promise as well as enormous challenges for all. The enormity of the discoveries within the Ring of Fire could bring multi-generational community benefits if the regulatory roadmap is clear, if enabling mechanisms for community participation and partnership are created by government, and if industry brings their best practices forward."