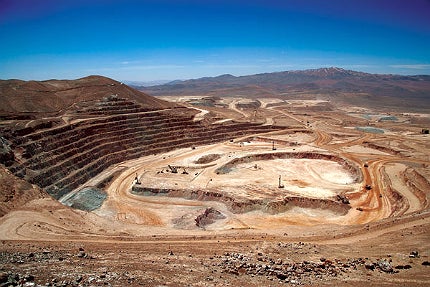 Escondida copper mine in the Atacama Desert in Northern Chile is the world’s largest copper mine by reserve. The mine contained more than 32 million tonnes (Mt) of recoverable copper reserves at the end of 2012.

Escondida is also the world’s largest copper producing mine – in the financial year ending June 2013 output stood at 1.1Mt, accounting for about five percent of global copper production.

BHP-Billiton operates the Escondida mine, holding 57.5% interest. Other stakeholders include Rio Tinto (30%), a Japanese consortium headed by Mitsubishi (10%) and the International Finance Corporation (2.5%).

The mine has been in operation since late 1990 and is currently one of the ten deepest open-pit mines in the world. The reserve life of Escondida is estimated to be 54 years.

Copper concentrate is produced from sulphide ore of the mine through floatation. The mine also produces copper cathodes from oxide and sulphide leach ore. Sulphide ore comprises more than 82% of the mine’s copper reserves.

Cananea, also known as Buenavista copper mine, located in Sonora, Mexico, is the world’s second biggest copper mine by reserve.

Opened in 1899, Cananea is one of the oldest open-pit mines in North America and is currently owned and operated by the Southern Copper Corporation (SCC), a subsidiary of Grupo Mexico. The mine extracts the porphyry copper deposit lying within the southern Cordilleran region.

The ore is refined at an on-site concentrator, which has a milling capacity of 77,000 tonnes per day (tpd). The concentrate output is transported to the smelter at La Caridad by rail. Also present are an on-site leaching facility and two solvent extraction and electro winning (SX/EW) plants, with a production capacity of 55,000 tof copper cathode per year.

Collahuasi copper mine 180km south-east of the port of Iquique in northern Chile ranks as the third largest copper mine in the world. Proven and probable copper reserves of the open-pit mine as of December 2012 stood at 25.895Mt. The mine produced 282,096t of copper in 2012, accounting for 5.1% of Chile’s total copper output.

Collahuasi copper mine is owned and operated by Compañía Minera Doña Inés de Collahuasi, a joint venture between Anglo American (44%), Xstrata (44%) and a consortium of Japanese companies led by Mitsui (12%).

The mine produced 245,288t of copper concentrates and 36,808t of copper cathodes in 2012. It has been in operation since 1999. It exploits three mineral deposits, namely Rosario, Ujina and Huinquintipa, in the Pica municipal district of Tarapacá Region. The mine life is 70 years.

Located 80km north-east of Santiago in northern Chile, the Andina copper mine is the fourth biggest copper mine in the world by reserve. The mine was estimated to contain 18.8Mt of fine copper (2,551Mt of ore grading 0.74% copper) at the beginning of 2013.

Andina is owned and operated by Chile’s state-owned Codelco (Corporacion Nacional del Cobre de Chile), the largest copper producing country company in the world. The copper deposit was discovered in 1920 and mining operations began in 1970.

The Andina mining operation consists of Río Blanco underground mine and the Sur Sur open pit mine exploiting the Río Blanco deposit. The mine produced 249,861t of fine copper and molybdenum in 2012.

Toquepala copper mine, situated 870km away from Lima in Southern Peru, ranks as the world’s fifth largest copper mine by reserve.

The open-pit mine was estimated to contain 17.65Mt of copper reserve as of December 2012. Southern Copper Corporation (SCC), a subsidiary of Grupo Mexico, owns and operates the mine.

The extracted ore is refined at an on-site concentrator with a milling capacity of 60,000tpd. The concentrate output is transported to the smelter at Ilo by rail. Toquepala also has a solvent extraction and electro-winning (SXEW) facility, which has a copper cathode production capacity of 56,000 tonnes per year (tpa).

El Teniente copper mine, the world’s sixth biggest, is located 80km south of Santiago in the Andes mountain range in Chile. It is also the largest underground copper mine in the world.

Mining activities at El Teniente started in 1904. Codelco owns and operates the mine. Kennecott Copper Corporation was the operator before Codelco came into being in 1976. The copper products of El Teniente include fire refined lingots (RAF) and copper cathodes.

The mine has its own smelter near the site and produces more than 400,000t of fine copper a year. The production in 2012 included 417,244t of fine copper and molybdenum. An expansion project called the New Mine Level project is under development to access the ore located deeper down at El Teniente. The project, expected to be operational in 2017, is hoped to extend the mine life by 50 years.

Cerro Verde copper mine, located 20 miles south-west of Arequipa in Peru, is the seventh largest copper mine in the world. The open-pit mine was estimated to contain 12.9Mt of recoverable copper at the end of 2012. It produced 270,000t of copper in 2012.

The Cerro Verde copper mining complex includes a concentrator facility with ore milling capacity of 120,000tpd and a solvent extraction and electro-winning (SXEW) facility. A large-scale expansion plan is underway to raise the concentrator capacity up to 360,000tpd by 2016.

Cerro Verde has been operational since 1976. Freeport-McMoRan (FCX), holding a 53.56% interest, is the operator of Cerro Verde. Other stakeholders of the mine include SMM Cerro Verde Netherlands, a subsidiary of Sumitomo Metal (21%), Compañia de Minas Buenaventura (19.58%) and public shareholders (5.86 %).

The Radomiro Tomic copper mine is located in the Atacama Desert of Northern Chile and is the eighth largest copper mine in the world. The open-pit mine was estimated to contain 12.1Mt of fine copper (2,567Mt of ore reserve grading 0.47% copper) at the beginning of 2013.

The porphyry copper deposit was discovered in 1952 and has been operational since 1998. It is the first mine to be developed entirely by the state-owned Codelco and produced 427,791t of copper and molybdenum in 2012.

Construction work for the Radomiro Tomic Copper Sulphide Mine – Phase I was completed in June 2010 with an investment of $370m. A crushing system was installed as part of this phase, to haul up to 100,000t of sulphide ore per day from the Radomiro Tomic mine to the concentrator plant located at Chuquicamata.

Los Bronces copper mine 65km north-east of Santiago in the Andean Mountains of Chile is the ninth largest copper mine in the world. The open-cut mine was estimated to contain 11.13Mt of copper as of December 2012. It produced 365,300t of copper in 2012.

Anglo American, holding a 50.1% interest, is the operator of Los Bronces. Mitsubishi owns 20.4% of the mine while a joint venture of Codelco and Mitsui holds the remaining 29.5% stake. The mine has been in operation for more than 150 years. The remaining mine life is extendable beyond 30 years.

Los Bronces ramped up to full production in 2012 following the completion of a major expansion project in 2011. The mine produces both copper concentrates and cathodes.

Higher grade ore is milled onsite and sent in slurry form via a 52km pipeline to the Las Tórtolas flotation plant. Low grade ore is processed at the solvent extraction and electrowinning (SXEW) facility for the production of cathodes.

Grasberg mine in the Papua province of Indonesia ranks as the world’s tenth largest copper mine by reserve. The mine’s open pit and underground copper reserves as of December 2012 were estimated at 10.47Mt. The mine produced 315,246t of copper in 2012.

Grasberg is also the biggest gold mine in the world by reserve. The Grasberg mineral deposit was discovered in 1988. Open-pit mining operation started in 1990. Mining at the Grasberg open-pit, which is one of the deepest open-pits in the world, is expected to continue up to 2016.

PTFI holds a 90.64% interest in the Grasberg mining operation. The Government of Indonesia holds the rest, representin a 9.36% stake. Freeport Indonesia (PTFI), a subsidiary of Freeport-McMoRan (FCX), operates the mine. Rio Tinto also has a sharing agreement with FCX in the mining operation.

The 10 biggest uranium mines in the world

More than half of the world’s uranium production comes from just 10 mines.

The 10 biggest coal mines in the world

Three of the world’s 10 biggest coal mines by reserve are located in the Powder River Basin in Wyoming, US, while China and Australia each contain two of the biggest.