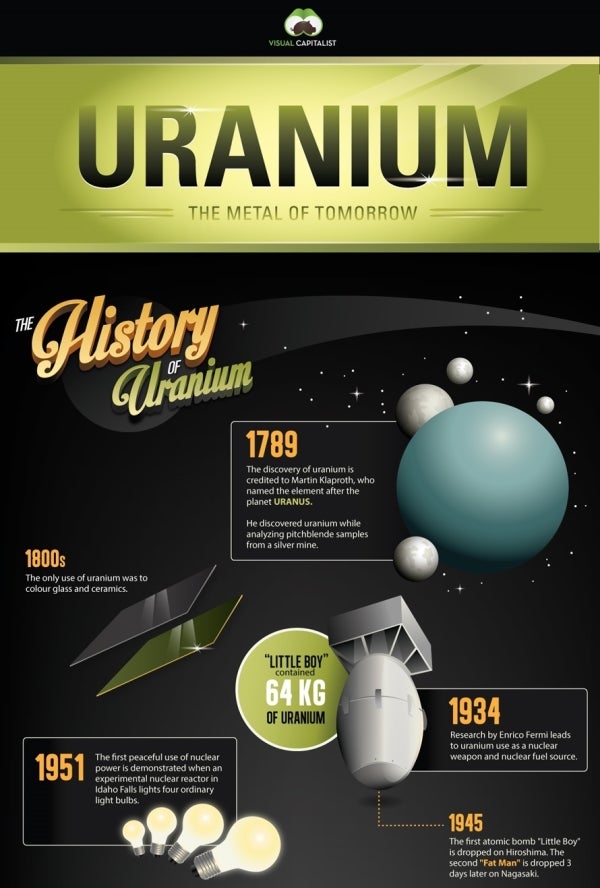 Martin Heinrich Klaproth was born in Wernigerode, Germany, on December 1, 1743. He discovered uranium in 1789, describing it as a "strange kind of half metal."

On September 24 of the same year he gave a formal talk at the Berlin Academy of Sciences. It was then that he proposed "uran" as the name for the element he found. Today it is known as uranium.

Analysis
Guatemalan Gold: the new issue of MINE is out now

Uranium is a "hard, dense, malleable, ductile and silver-white" metal. It contains sixteen isotopes, which are all radioactive, and has a density that is 70% higher than lead, but thinner than gold.

Uranium is of great importance as a nuclear fuel. It is used to generate electrical power, isotope development and weapons. It can also be used in "inertial guidance devices", gyrocompasses and x-ray targets.

Much like any commodity, uranium’s price on the market is influenced by supply and demand, as well as political impulses. These can cause uranium prices to increase or force prices to decrease, because of the presence of cheaper and more accessible energies, such as natural gas.

However, uranium does not get traded on the London or New York Stock Exchange, but it is bartered through contracts negotiated between a buyer and a seller.

These uranium agreements can be valued with a "single fixed price" or may have a primary "base price", specifically the uranium spot price. A spot market contract is usually priced "on or near the published spot market price" at the moment it is purchased.

Nuclear power makes up about 5.7% of the world’s total energy and around 13% of its total electricity. It uses uranium as its main source of power generation. The process occurs when the "nucleus of a U-235 atom captures a moving neutron it splits in two (fissions) and releases some energy in the form of heat."

It is only when these neutrons cause the nuclei of other U-235 atoms to split and release further neutrons, that a fission ‘chain reaction’ occurs. When this happens repeatedly, millions of times, it causes a large amount of heat to be produced from a small amount of uranium. The heat is then used to make steam in order to produce electricity.

The top three providers of uranium include Kazakhstan, Canada and Australia. At 34%, Kazakhstan is considered to be the world’s largest producer of uranium. Currently, the country has 15% of the world’s uranium resources and an expanding mining sector, which produced around 19,450 tonnes of uranium in 2011.

Canada was considered the top producer of uranium until 2009, when Kazakhstan took over as the leader. Canada’s output comes mainly from the McArthur River mine, which is located in northern Saskatchewan province and is the biggest in the world. In addition, it contains about four times the amount of energy contained in Canadian oil reserves.

The known uranium resources of 572,000, along with continuing exploration, will cause Canada to play a larger role in dealing with world demand. 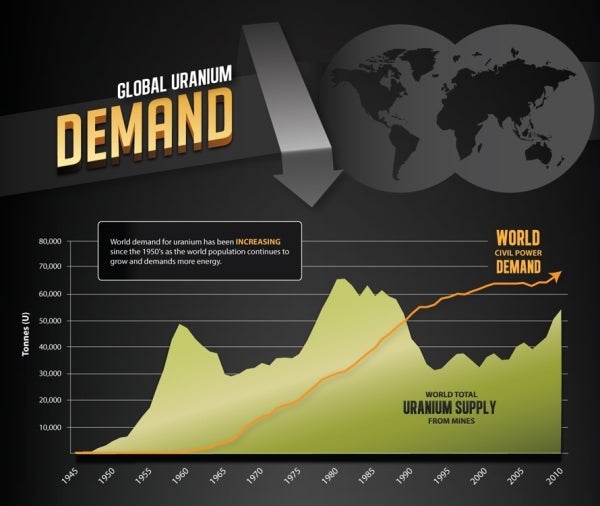 There are 464 nuclear power plants in 30 countries that are in operation, including 104 in the United States, according to the World Nuclear Association.

Another 64 are currently being constructed in 14 countries, including one in the US, another 26 in China, and seven in India, which has led to an increase in the demand for uranium.

The WNA 2011 Market Report reference scenario (post Fukushima accident) shows a 48% increase in uranium demand for 2013-2023. In addition, more efficient nuclear reactors, such as "fast-reactor" technology, could extend those supplies by more than two thousand years. 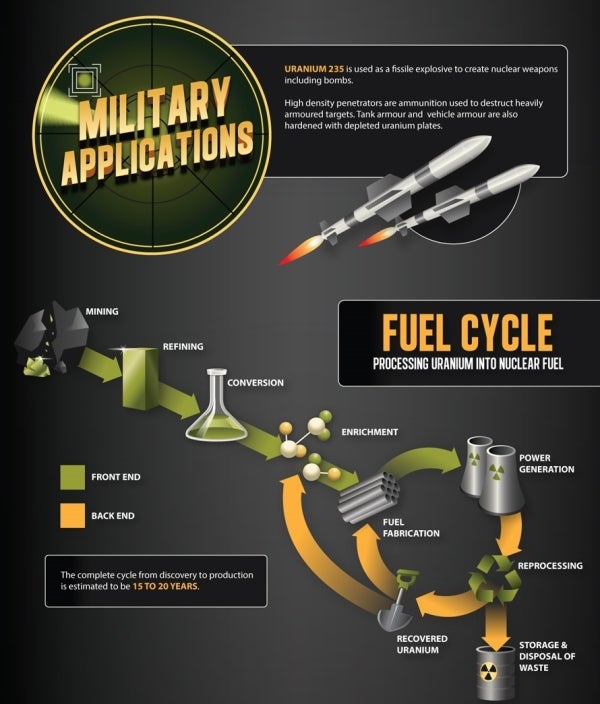 Uranium in the military

The primary application of uranium in the military sector is in "high density penetrators." One of the primary reasons why uranium metal is used is because of its thickness and durability.

At high impact speeds, the density, hardness and pyrophoricity of these uranium-based projectiles mean that it can severely damage armoured targets. Tanks and other detachable vehicle armaments are also shielded with depleted uranium plates.

The process by which uranium is turned into nuclear energy begins with the mining of the metal and concludes with the disposal of nuclear waste. The old fuel can then be reprocessed and used towards nuclear energy.

In order for uranium to be used in a nuclear reactor, it has to go through the steps of mining, conversion, enrichment and fuel production. This process makes up the ‘front end’ of the nuclear fuel cycle. The entire sequence can take from 15 to 20 years. 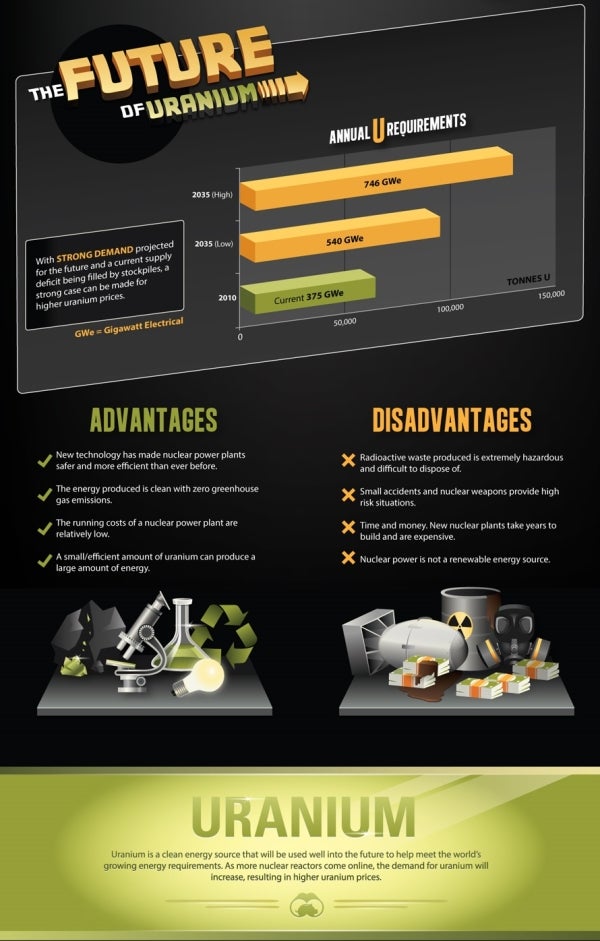 While demand is increasing for uranium, there are both advantages and disadvantages to consider in this metal. The benefits include safer and more efficient nuclear power plants. The kind of energy that is produced is clean with no greenhouse gases and the cost of operating a nuclear power plant is inexpensive. Furthermore, only a small quantity of the metal is needed to create a substantial amount of energy.

In terms of the disadvantages of uranium, it can have deleterious health effects and can lead to death because of its radioactivity. Radioactive waste is also an additional issue, if it is not disposed of at a safe place and not stored properly, it can leak radiation. Such emissions can last for centuries. Accidents can also lead to devastating effects, which can lead to events such as Fukushima. Additionally, the process of building new nuclear plants can also take years to build and may cost an exorbitant amount of money.